I often order books online, usually on the basis of a review.  To avoid plot spoilers, I skim the review for later reading and let the books pile up like gift-wrapped Christmas presents, full of mystery.  By the time I read it, I’ve forgotten the review and even why I ordered it.  And that’s exactly how I like it.  I approach a new book with excitement (it had a great review!) and with caution (what’s it about?).

So when I started Nathan Filer’s debut novel, The Shock of the Fall, I didn’t read the blurb, ignored the front cover, and stayed right away from the back cover.  I didn’t know if it was a soulful Irish novel, a fashionable roman de clef, or a millennial dystopia.

It turned out that being blindfolded was the perfect way to approach this suspenseful novel, filled as it is with slow reveals.

Written in the first person, the strong voice of a nine year old boy Matthew, and later his nineteen year old self, immediately captures your attention.  Older Matthew is writing his recollections, including of a traumatic childhood holiday.  We don’t know where he is – “this place”, he calls it.  Hints are scattered through the first third of the novel – he has attended art group, and seen a social worker and an occupational therapist.   He worries about weight gain from his medication and shows little empathy. He may hear a voice or two.

With great compassion, the novel charts the progression of a severe mental illness in a teenager and the dull life on a psych ward.  What makes it special is that it’s from Matthew’s perspective.  For example, he describes hallucinations in this way (p66):

It’s like we each have a wall that separates our dreams from reality, but mine has cracks in it.  The dreams can wriggle and squeeze their way through, until it’s hard to know the difference.

I have an illness, a disease with the shape and sound of a snake.  Whenever I learn something new, it learns it too.

As Mark Haddon achieved in The Curious Incident of the Dog in the Night-Time, in the Shock of the Fall the reader is able to empathise with someone who thinks differently.  Matthew’s story has to be rational enough for us to be able to follow the narrative yet at the same time convey a disassociation from reality.  We must also be able to relate to Matthew, or at least to the circumstances in which he finds himself.  In fact, Matthew, like Holden Caulfield, is engaging and immensely likable.  We barrack for him.

Like Gail Honeyman’s 2017 novel Eleanor Oliphant is Completely Fine, which traces loneliness and, perhaps, PTSD, the Shock of the Fall is both tragic and at times laugh aloud funny – see for example Matthew’s description of the student nurse trying to see what he’s writing on the computer (chapter title “please stop reading over my shoulder”, p18-19).  A section on a nurse dithering over whether or not it’s appropriate for patients on the psych ward to have access to a nursing dictionary is perfectly crafted (p30-31).  It made me smile and grimace in quick succession.

The narrative includes clever descriptions of hospital culture.  For example, Matthew is surprised to learn that he is a ‘service user’, with a nurse having to explain “Service Users.  Um – patients.” (p233 – see also Rosella Room‘s earlier post on terminology The Patient is MIA).  A junior female doctor is bullied by an older male professor (p277).

A patient relates how nurses characterise a patient’s taking notes as an aspect of their pathological behaviour, with observation notes reporting the patient has been “engaging in writing behaviour” (p215-216).  Matthew mocks that characterisation, naming a chapter of his recollections concerning his sketching “drawing behaviour”.  Here Filer is re-telling the renowned 1973 study “On Being Sane in Insane Places” by D L Rosenhan, a professor of psychology and law.**  This was an experiment in which eight sane people, including a psychiatrist and several psychologists, gained secret admission to psychiatric wards by exhibiting fake symptoms of schizophrenia.  The aim was to determine if their sanity would be detected once on the inside. (Spoiler alert: it wasn’t.)  Filer may well weave into the story more psychiatric tropes, as it were.  Are there any readers out there who’ve spotted other nods to psychiatric history?

The deceptively simple writing is often lyrical – Filer is also a performance poet.  For example, describing the period after a child’s death, Matthew says (p65):

Day and night flash in a strobe, seasons collide, clouds explode, candles melt onto icing sugar, a wreath rots away.

An air of authenticity makes this novel very readable.  Indeed, Filer trained as a psychiatric nurse before taking up writing and renders clearly the features of schizophrenic disorders.  He also deftly deals with loss, guilt and grief (I won’t reveal the back story here).  Characters are well-drawn, whether minor, like the nurse Steve, or pivotal like Nanny Noo.  Facsimiles of medical notes, letters and Matthew’s sketches help make it believable.

The Shock of the Fall is a powerful novel.  It’s not just a book about schizophrenia.  Its themes and insights into contemporary life transcend the world of mental health.  Beautifully written, I couldn’t put it down.  It won a host of literary awards, including Costa Book of the Year 2013.

Filer’s next book, The Heartland: finding and losing schizophrenia, a work of non-fiction, will be published shortly by Faber & Faber.

Nathan Filer, The Shock of the Fall, Harper Collins / The Borough Press, 2014. First published in the US as Where the moon isn’t. 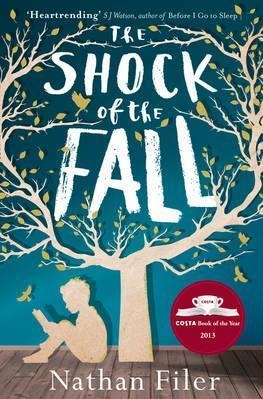